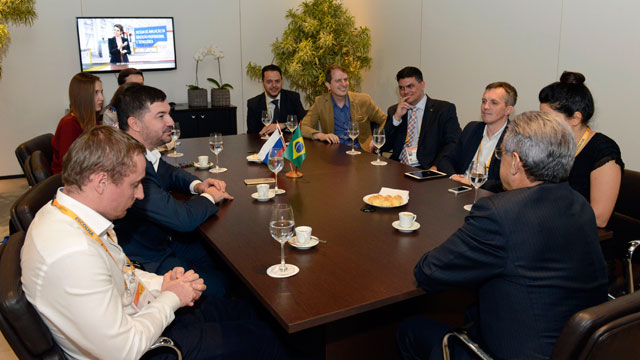 21/11/2016 - The National Service for Industrial Training (SENAI) has signed an international service provision agreement with WorldSkills Russia to prepare Russian competitors and trainers for the next worldwide technical professions competition, WorldSkills Abu Dhabi in the United Arab Emirates in October 2017. The president of the National Confederation of Industry (CNI), Robson Braga de Andrade, signed the agreement with the entity, represented by its general director, Robert Nailevich Urazov, during the Brazilian tournament of professional education, Olimpíada do Conhecimento 2016, which took place in Brasilia from November 10 to 13.

SENAI consultants will offer the Russian delegation similar training to the one that guaranteed the Brazilian team the first place in the 2015 world championship in São Paulo with 31 medals. “As last year we had WorldSkills in São Paulo, which was a success, and SENAI stood out as number 1 in the medal ranking, we are receiving a growing number of demands from WorldSkills member countries that ask for SENAI’s advice to improve the level of the competitors to structure models of professional education”, explains the manager of International Relations of SENAI, Frederico Lamego.

The training will occur from March to July, 2017. There will be four weeks of preparation in Brazil and three weeks in Russia in seven areas: Mechatronics, Electronics, Web Design, Graphic Design, Jewelry, Integrated Manufacturing and Fashion Technology. This month, SENAI sent seven consultants to Russia to make a diagnosis of the existing infrastructure and technical skills of Russian trainers and competitors.

The value of the agreement signed is R$ 2.3 million. The goal of the Russian delegation is to improve ranking positions next year and, mainly, to repeat the Brazilian achievement of being a home champion, since in 2019, WorldSkills will be held in the Russian city of Kazan.

ABU DHABI - The Brazilian challenge in 2017 is to remain at the top of the podium. To that end, 48 competitors have already started their preparation, which lasts a year, in order to try to fulfill the dream of maintaining in Brazil the title of the best professional education in the world. Between October 31 and November 4, the group participated in physical, psychological and motivational lectures in Brasilia, as part of the training.

From January until September of next year, students enter the “concentration” phase, a period of nine months of preparation in three training centers, assembled with dorms, cafeteria and training structure reproducing the more than 30 technical modalities. Each training cycle will last 21 days a month - on the remaining days the student returns to the home state - giving an idea of the effort and dedication of each competitor to try to become a champion in Abu Dhabi.

Last week, Brazil met the great winners of the national tournament, after four days of challenging tests. The largest competition of technical professions in the Americas brought together 1,200 competitors - students from SENAI, the Social Service of Industry (SESI), Federal Institutes of Education and public schools. The event received 118,754 visitors in a space of 50 thousand m², built in the external area of the Nilson Nelson Gymnasium.