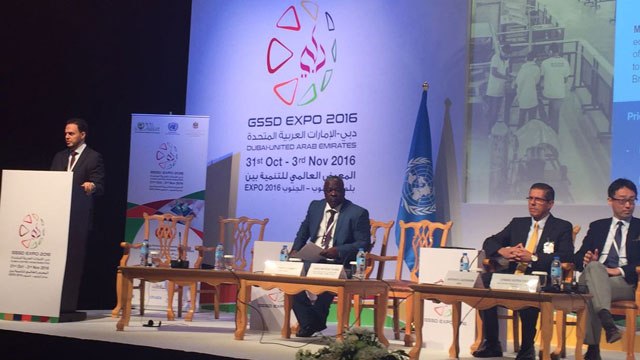 09/11/2016 - The National Service for Industrial Training (SENAI) coordinated, on Wednesday (2), the Forum of Solutions on Development of Competencies Focused on Results, at an event organized by the United Nations (UN). In Dubai, the Global Exhibition for South-South Development discussed effective solutions from institutions that contribute to achieving the UN’s sustainable development goals.

SENAI’s International Relations Executive Manager, Frederico Lamego, highlighted in the panel the results and impacts of the projects developed by the institution in Latin America and Africa, such as the number of graduates, social impacts, and the inclusion of women in the labor market and the participation of local companies. In addition, he invited representatives from partners from Angola, Peru, Japan and the Brazilian multinational Vale to present success stories of partnerships with SENAI.

The panel was presented to 65 people from UN agencies, international foundations and development agencies in Europe and Asia. After the event, 11 institutions have already sought SENAI to better understand the international performance developed by the institution.

According to Industrial Development specialist Tatiana Mello, SENAI’s participation in the event was important to bring new ideas and partnerships to expand projects in Africa. “SENAI has already participated in other editions of the event, but it was the first time that it conducted one of the forums. This was important for SENAI, not only for its international visibility, but also for the exchange of experiences with other cooperation agents”, he explains.

The Global Exhibition for South-South Development was attended by 700 representatives of international institutions, agencies and governments. In addition to being invited to lead the Solutions Forum, SENAI was present at the event in a promotional booth, in which it publicized its excellence in international technical cooperation and its publications on the subject.