Brazil, Haiti and the UN sign an agreement to strengthen the professional education in the Caribbean country 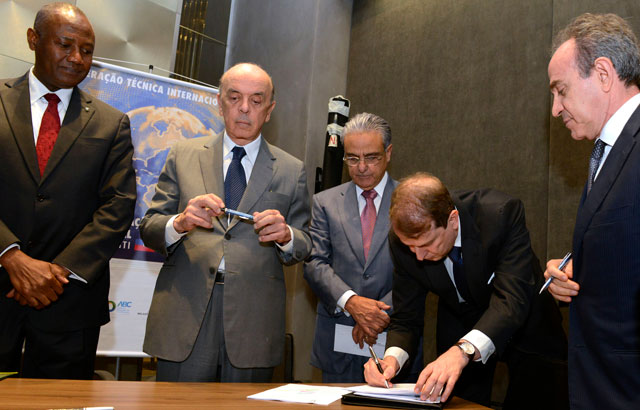 10/11/2016 - Brazil and Haiti signed a technical cooperation protocol to establish a vocational training center in the Caribbean country, following the guidelines of the National Service for Industrial Training (SENAI). Under the agreement signed on Wednesday (9) by SENAI, the Ministry of Foreign Affairs of Brazil, the Government of Haiti, the Brazilian Cooperation Agency (ABC) and the United Nations Development Program (UNDP), the country will have the Brazilian expertise to qualify professionals who will be important for the reconstruction of the country, hit by a hurricane, in October.

“This project will have a special impact on the lives of Haitians. It will promote professional insertion and entrepreneurship, which are the necessary bases to ensure the reconstruction of Haiti in a sustainable way. Currently, we have a portfolio of international projects in the order of R$ 184 million, totaling more than 22 projects and 69 partnerships with 45 countries”, said the president of the National Confederation of Industry (CNI), Robson Braga de Andrade.

PARTNERSHIP - US$ 17 million will be invested in the Reconstruction Fund of Haiti, created by the United Nations (UN), the Inter-American Development Bank (IDB) and the World Bank in 2010, when the country was devastated by an earthquake that killed 200,000 people and caused losses of more than US$ 10 billion. The estimate is that, per year, the educational unit will train up to 3,000 students between the ages of 16 and 25. The construction and/or reformation of the centers will be tendered by the UNDP. The locations that will receive the schools are yet to be defined by the Haitian National Institute of Vocational Training (INFP), the project partner.

At the signing ceremony, Foreign Minister José Serra said that Brazil has a long-term commitment to promoting Haiti, rebuilding the country, strengthening Haitian institutions and consolidating democracy. “Of all agreements we signed this year, I can safely say this is one of the most important ones. We are sensitive to the challenges the Haitian people are facing and we have sought to make the best contribution to the country’s efforts to consolidate its democracy, to develop and overcome poverty”, said the minister.

According to the Secretary of State for Vocational Training of Haiti, Jean David Geneste, the protocol will allow both countries to strengthen the ties of cooperation and friendship. He said the country needs skilled labor to promote the country’s economic and social development. “Recently, the south of the country was heavily affected by Hurricane Matthew. But we have many opportunities in the areas of civil construction, agriculture, textiles and food and this agreement will allow us to train our young people. This is essential for us to rebuild”, he said.

INTERNATIONAL PRESENCE - The partnership between SENAI and ABC already has nine centers of international professional training. SENAI has established partnerships with foreign centers of excellence for technology, such as cooperation with the Massachusetts Institute of Technology (MIT) and the Fraunhofer Institute in Germany, or bringing their expertise to countries in Africa and Asia.

The training areas will comprise occupations of high employability and demand of the local economy, such as Civil Construction, Sewing, Building Electricity, Joinery, Mechanics of Automobiles and Motorcycles and Metallurgy.