This is a topic of increasing concern for companies. The lack of clarity about rights and duties and increasing amendments to laws and regulatory frameworks are detrimental to competitiveness. The lack of confidence that institutions will uphold existing laws raises doubts about the stability of legal relations and uncertainties about the consequences of acts based on legal standards in force, i.e. it creates legal uncertainty.

Standards with imprecise wording make room for diverging interpretations by law enforcers. New standards developed in conflict with existing ones, without an explicit definition of revocation, raise doubts about which legislation is in force. These are examples of poor-quality regulations that increase the judicialization of disputes.

A large amount of lawsuits, coupled with the sluggishness of the judiciary, leads to legal uncertainty. The lack of a clear definition for the competencies of the branches of the Republic as well as of those of the Union and of states and municipalities is an additional factor contributing to this problem.

Legal uncertainty forces companies to incur more litigation costs and to make provisions to defend themselves against the lack of clear standards.  Rising costs and uncertainty discourage investment and, consequently, undermine economic growth.

In 2022, the legislature produces more relevant, clear and stable standards. There is less overlapping between the activities of the branches of the Republic and of states and municipalities, reducing conflicts of competence. The judiciary branch becomes more efficient by reducing the number of new lawsuits and procedural deadlines and relying more on out-of-court dispute resolutions and on stricter observance of court precedents.

How are we doing? 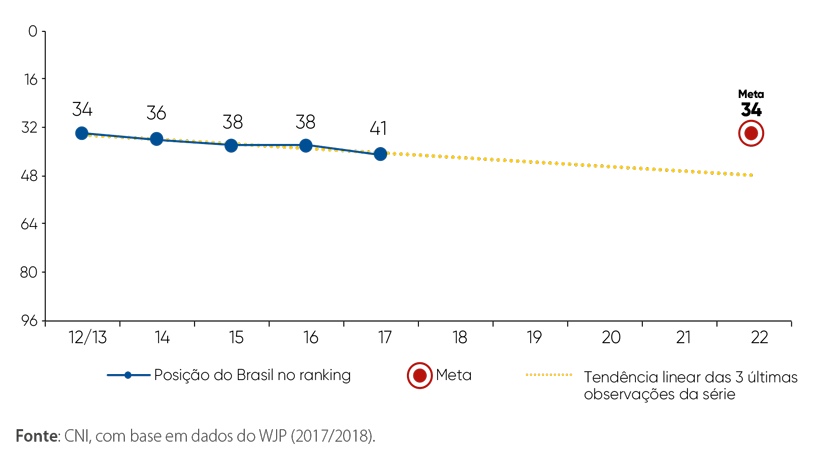 Description of the indicator: Brazil’s position in a legal certainty ranking created based on the average rating of 96 countries in relation to the factors Limited Government Powers/Constraints on Government Powers, Regulatory and Civil Justice of the Rule of Law Index survey conducted by the World Justice Project.

PREDICTABILITY AND QUALITY OF STANDARDS

Clear, well-known and stable laws and regulations with predictable interpretations increase the ability of companies to plan investments and measure the consequences of their actions, reducing the risk and cost of doing business. Predictability and lower costs result in more investment, greater competitiveness and more intense growth.

In order to be predictable, standards must first of all be known. Knowledge of standards in Brazil is made difficult by the excessive number of laws, fragmentation, multiple sources and complex and specialized language.

The number of standards issued every year in Brazil must be reduced, including of infralegal ones. Standards must be objective and the decision to issue them should be based on a cost-benefit analysis.

The lack of a clear definition of the responsibilities of the branches of the Republic as well as of the Union, states and municipalities creates conflicts of competence and contribute to increasing legal uncertainty. The result is always higher costs and lower investment, with negative impacts on the competitiveness of industry.

NUMBER OF STANDARDS ISSUED IN BRAZIL, IN MILLIONS

Halting the increase in the number of standards issued (4.5% per year over the past 5 years), keeping it at a maximum of 5.5 million

PREDICTABILITY IN THE APPLICATION OF STANDARDS

Diverging court decisions on similar cases are one of the main sources      of legal uncertainty. The sluggishness of the judiciary further aggravates this problem. Using precedents and binding precedents constitutes an advance both in preventing divergences in the application of standards and in speeding up court decisions.

In court decisions, the interests of the public sector often override the rights of individuals and companies. Contract breaches occur especially in areas such as the environment, consumer law, regulation of public services and labor, social security and tax-related issues.

Control and inspection cannot be additional sources of legal uncertainty, or else they can do more harm than good.

Piercing of the corporate veil for reasons incompatible with the spirit of the law is a frequent phenomenon. This phenomenon causes legal uncertainty and discourages entrepreneurship, as entrepreneurs develop doubts as to whether they will be able to keep their private assets in case of business failure and of the need to pay off the debts of their company.

Ensuring predictability in the application of standards

Excessive judicialization of  disputes  increases  costs  for  companies  and for the state and contributes to the sluggishness of the Brazilian judiciary system. The result is that entrepreneurship is discouraged and, consequently, economic growth is undermined.

Because of cultural issues and of incentives provided for in the standards themselves, most disputes are referred to the judiciary without any prior attempts at friendly settlement between the parties.

Stakeholders should seek alternative solutions such as mediation and conciliation. Using arbitration is also an example of seeking a solution for out-of-court dispute resolution.

Conciliation rates are  still  low. The  willingness  of  the  parties to  settle a dispute out of court decreases as their case progresses through the court system, since the winning party in a lower court reinforces its expectation of also obtaining a favorable decision from appellate courts and the losing party chooses to exhaust all opportunities and postpone the final decision before engaging in negotiations.

For these instruments to be used for settling disputes they must be  accessible, impartial and effective. For this purpose, it is imperative to provide specialized training to all legal professionals and strengthen mediation and arbitration institutions.

INDEX OF CONCILIATION IN THE JUDICIARY (2016) 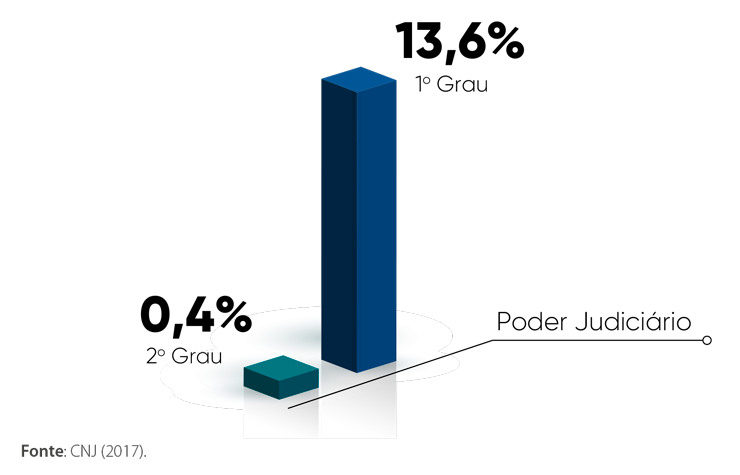 Reducing the judicialization of disputes 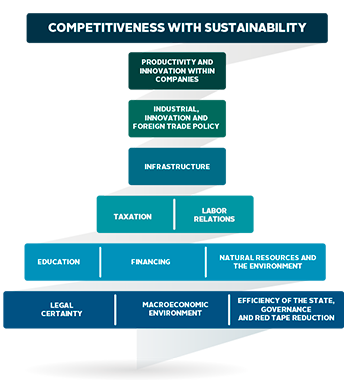 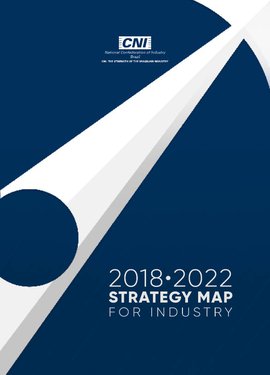